I set off investigating, with an aim to write about this theme: for every conceivable way of making a living, there is some organism, somewhere, that does it. But all I came up with were dead ends. There were plenty of red herrings along the way, some pretty interesting: it turns out that the convict fish (Pholidichthys leucotaenia) is not named for its lifestyle, but rather for its pattern of black and white stripes. Juveniles have a single silvery-white stripe along the length of their bodies. This probably gives them protection by allowing them to mimic shoals of stinging coral catfish. 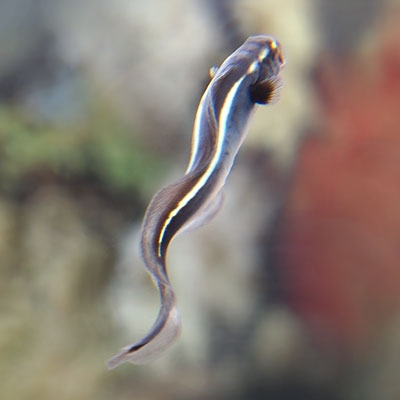 As they grow, convicts undergo a remarkable transformation, stripes morphing from one orientation to the other. Adults wear their black and white in an irregular vertical pattern. These fish also go by other names, including the engineer goby, because they dig such extensive networks of tunnels under the Indo-Pacific reefs where they live. This industrious behaviour can be quite useful in captivity: convict fish are great for keeping the substrate of your aquarium aerated. Using some novel biomechanics, the eel-shaped adults can even swim backwards – apparently quite unusual for this type of fish3. 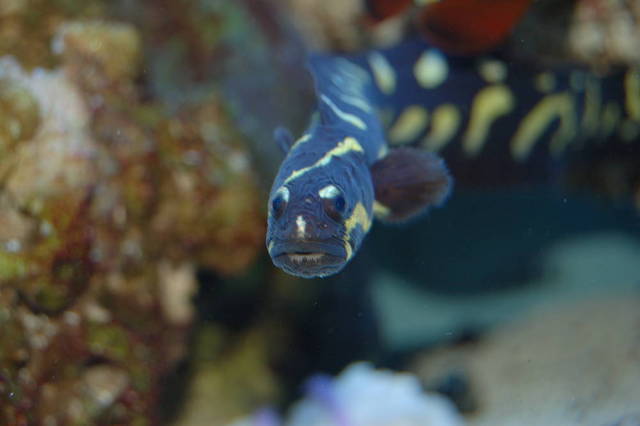 Interesting stuff, but I could not turn up a single scientific study on their feeding behaviour. Instead, all of my digging was leading me back to the same place: Eugenie Clark, the Shark Lady.

Clark was the first person to observe the convict fish in the wild. A pioneering marine biologist, intrepid diver and accomplished submersible pilot, Clark is a sort of underwater Jane Goodall, and she is responsible for a great deal of what we know about fish in their natural habitats. She learned to dive in the 1940s when she was a graduate student, and it led to a lifelong career chasing everything from tiny hermaphroditic reef fish to massive whale sharks. As of 2007, she had been on nearly 6000 dives across the globe from the Caribbean to the Red Sea, Indonesia and Japan, published hundreds of scientific papers and several books, founded the research centre now known as the Mote Marine Laboratory in Florida, and tried her hand at spear fishing – all while raising four children. Even pregnancy did not keep this woman out of the ocean. 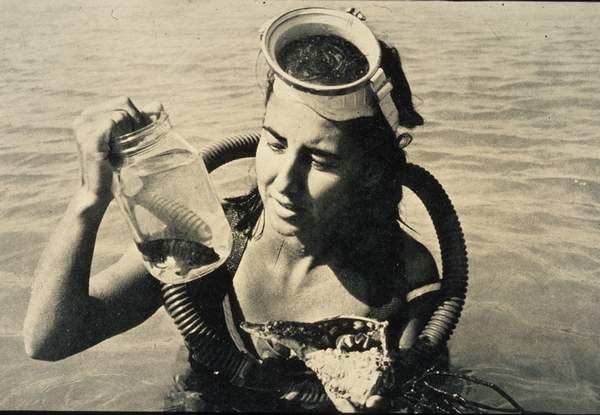 Eugenie Clark with a hermaphrodite belted sandfish. From The Herald-Tribune.

Retirement from her professorship at the University of Maryland brought her back to the Mote Lab in Florida, husband in tow. Apparently the new location was a compromise, since he was living in Hawaii at the time.

It gets better: the Shark Lady is still diving well into her 80s. This despite a bout with lung cancer at 82 – Clark had just found a new clam in Indonesia, when a diving injury brought her in to the doctors who discovered her cancer. Three years later, she was celebrating her 85th birthday with over 250 people at the Mote Lab, with plans to hop on a plane to Papua New Guinea right after. The Shark Lady was headed back into the field for a six-week diving trip to study her latest obsession: the convict fish.

Since she first observed swarms of juvenile convicts exploding from the reefs in the Solomon Islands, the Shark Lady has been trying to get a handle on what goes on each night when the young return home. At first, Clark and her team tried wriggling an endoscopic video camera into the burrows. More surprises lay within: the convict burrow is a complex maze full of smaller chambers. In some, clusters of juvenile fish were literally hanging out, their heads attached to the ceiling by strands of mucous so thin they were nearly invisible4. Other juveniles swam right into their parents’ mouths as they returned after a day of foraging, to be released unharmed later on.

The Shark Lady’s first thought was that the adults were cannibals – weird as it seems, this could be a natural transition in fish that protect their broods by holding them in their mouths. Plenty of fish also venture into the mouths of larger individuals to perform cleaning services. After failing to find any evidence of juvenile fish in the stomachs of dissected adults, Clark came up with a different idea. Maybe the young convicts are delivering food back to their parents.

Lately, Clark has been observing convict fish behaviour in captivity at the Mote Marine Lab, using artificial burrows of glass and mirrors. In spite of these efforts, it seems the fish remains a mystery for now. Regardless, the convict burrow is an incredible example of something quite unusual in fishes: parents providing long-term protection to their offspring.

And if Clark’s latest idea about how the adults feed is correct, the results would be revolutionary. Parental care is seen throughout the animal kingdom, but caring for parents and older adults is, like language, one of those few uniquely human traits. Many birds feed members of their extended family, but these tend to be younger relatives. Other animals behave in ways that look like precursors to elder care. Elephants and giant otters give special attention and comfort to elderly matriarchs5, 6, but never long-term. So who’s weirder? It just might be the Shark Lady’s own school of children and grandchildren. The real oddity is that for us, caring for family comes so easily.