I’m back at the Bronx Zoo now, with the model peahen, attempting some more behavioural experiments. My first day was both good and bad. I had no trouble finding my accommodations on the zoo grounds last night – I’m staying in the “Bat Cave”, so named because of the bats.

(Not really – the apartment is called the Bat Cave because it’s on the ground floor of the building pictured below, which also houses the families of three zoo staff members that live permanently on site…) 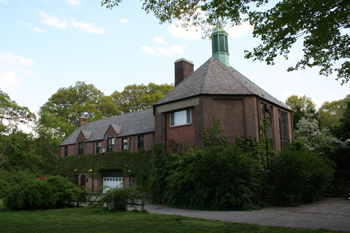 If the fact that several staff members live on site doesn’t give you a sense of how well-equipped this zoo is, perhaps the contents of my apartment will. I have my own kitchen, washer and dryer for laundry, animal-themed blankets on the bed, and if bored I can read anything from The Iliad to Seabiscuit:

Books in the Bat Cave: no one can complain about the selection.

The zoo even has it’s own NYPD patrol. 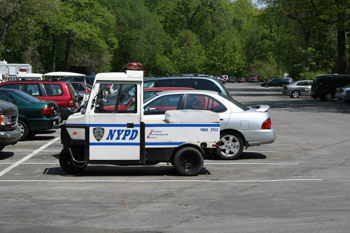 In the future, all police will drive golf carts.

I managed to head out this morning at 6 am, beating the peafowl by at least an hour (since, for birds, they tend to roost until fairly late in the morning). It didn’t take long to find the main lek; males were roosting conspicuously in most of the surrounding trees. It was a spectacular one – at least 10 males displaying in view of one another, with another 5-6 quite close by. At first glance, this would seem ideal. I had an excellent view of a large number of birds. However, all of the display territories were nested within mammal enclosures that I couldn’t access. The birds were just out of my reach, and I needed males in accessible areas so that I could set Penelope up nearby.

I spent the rest of the day on foot, continuing to explore the peafowl haunts with Penelope in tow (I walked at least 15 km today all told – this zoo is huge!). People were startled, fascinated and amused by Penelope, and many of them tried to talk to me about her. Normally this would have been slightly annoying, but today it helped me stay positive despite the other frustrations. By afternoon, I had managed to get a few good peacock videos and permission to work in one of the mammal enclosures for tomorrow. I’ll be in and out with Penelope before the nyala (an African antelope) are released into the enclosure for the day, and again at the end of the day after they’re put inside for the night.