I have seen my first peafowl egg. Laid in the sink of the men’s bathroom, some of the Arboretum staff found it and brought it to me, unsure of what to do with it. The peafowl are overpopulated here and the staff are encouraged to find (and destroy) eggs. I ended up giving this one to Rob’s relatives from Palmdale in the hopes that they could hatch it (they keep chickens and have an incubator).

Perhaps in line with the fact that laying season is upon us, we’ve seen a few quite heated episodes involving the peahens in the last few days. Specifically, I’ve seen a couple instances of females being aggressive towards other females right in front of displaying (and preferred) males. Although this behaviour has been described before, it’s quite a paradoxical thing from the evolutionary point of view since female-female aggression over a presumably unlimited resource (mates) would be entirely spiteful.

I had seen the females in Winnipeg aggressively displaying their tails to each other in front of certain males a few times, but a recent episode here in Los Angeles has clarified the situation. This was, unmistakably, a female trying to prevent other females from mating with one of our top males. Here’s how it unfolded…

Male no. 30 was displaying his tail, with three females in the area: two sitting nearby in a little garden, preening away, and the third seeming to mirror the male while she aggressively displayed towards the preening females. 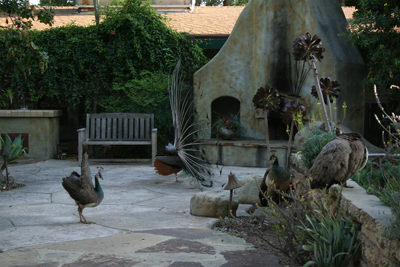 This went on for several minutes. Eventually, one of the preeners got up and left, and a few seconds later the aggressor lowered her tail and started walking away. Almost immediately, the second preener hopped down from her perch and accepted male 30’s advances right away. This brought the aggressive female literally running back to the scene, but it was too late for her to prevent the copulation. Luckily we managed to photograph the whole thing. 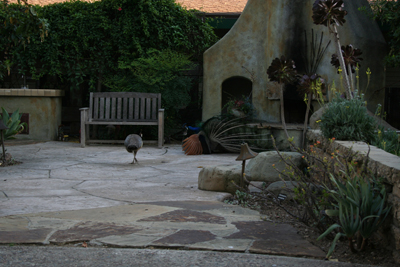 Not sure what to make of it yet, but interestingly yesterday I saw more female-female aggression in front of another one of our favoured males. Our good intentions to work this morning were foiled by some light rain (peacocks don’t do anything when their trains are wet), but hopefully I’ll see some more of this action soon.