My title is a reference to Richard Dawkins’ book “Unweaving the Rainbow“, which is itself reference to the English Romantic poet John Keats3. In “Lamia“, Keats wrote that “there was an awful rainbow once in heaven” which, thanks to science, is now forced into “the dull catalogue of common things”.

Keats was alluding the Isaac Newton’s work on optics. In the late 1600s during an outbreak of plague, Newton was stuck at home in his family’s country manor – so he conducted some experiments with prisms right at the window of his study. This work led him to realize that refraction can separate white light into the spectrum of colours – and, for the first time, to understand how rainbows work. Keats believed that by explaining away the mystical power of phenomena like this, Newton took something away from us.

Others have echoed his protest. Edgar Allen Poe wrote a sonnet addressed “To Science“:

Science! True daughter of Old Time thou art!
Who alterest all things with thy peering eyes,
Why preyest thou thus upon the poet’s heart,
Vulture, whose wings are dull realities?

In his book, Richard Dawkins makes a case against Keats, Poe and their antiscientific ilk3. He argues that rational explanations do not necessarily take away from our sense of wonder about the world. Instead, they often enhance it. He writes:

Keats could hardly have been more wrong, and my aim is to guide all who are tempted by a similar view, towards the opposite conclusion. Science is, or ought to be, the inspiration for great poetry.

And it turns out that in the case of the rainbow, Dawkins is spot on.

Here’s why: until Newton’s prism experiments, no one had a clue about colour. People thought that different colours were made up of different mixtures of light and darkness, and that prisms worked by adding the colours to white light. For instance, take Robert Hooke, the polymath known as much for his wave theory of light as the pioneering microscopy work he did with fleas and bottle corks. Hooke had a theory of colour involving a progressive scale of modifications to white light: red was the closest to pure white light, whereas blue was the last step before total darkness and the absence of light.

Newton’s experiments proved that this was incorrect: all seven colours of the rainbow are contained within white light. He showed this quite clearly with some clever experiments involving two prisms, a lens, and some careful alignment. Newton figured out how to break sunlight apart into the rainbow and put it back together again.

The arts community was fascinated with Newton’s demonstration that light alone was responsible for colour. What’s more, in “Opticks“, Newton was the first person to arrange the colour spectrum on a wheel. Artists quickly picked up on this new arrangement for their palettes, and, though Newton didn’t realize it, this was the first time the primary colours were arranged across from their complements. The colour wheel emphasized the way pairs like red and green, blue and yellow, and purple and orange enhance one another through contrast. Amateur fans of Newton’s work like the French painter Claude Boutet helped spread this colour theory revolution, removing black and white from the conceptual artists’ palette for the first time.

Colour theory inspired people like J. M. W. Turner, the master of Romantic Era landscape painting, to break free from traditional ways of depicting light. Turner made extensive use of complementary colours for emphasis in his scenes for a powerful, and often spiritual, effect: 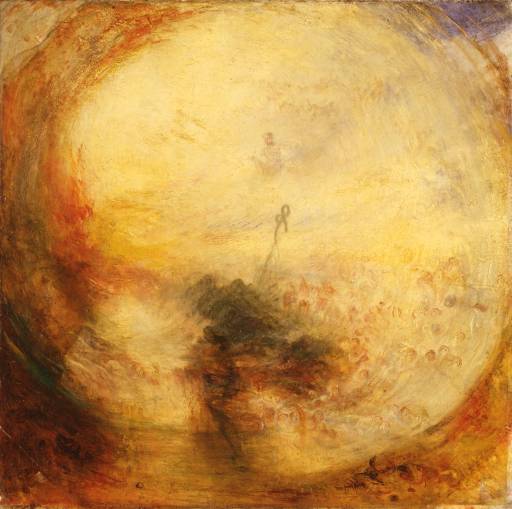 Turner started using complementary colours for shadows, abandoning blacks and greys – and he inspired the generation of Impressionists that followed to do the same. Compare Light and Colour (1843) to the image at the top of this post, a piece from much earlier in his career (1798).

Light is also the key to the Buttermilk Creek story. Unlike some archaeological sites, organic material is not well preserved in the Texas environment. That means no remains, no charcoal, and no scraps of organic waste left behind that the researchers could date using carbon-based radioisotope methods4. But a precise date was critical to proving that the tools in the layer beneath the Clovis sediments were truly there first. The team, which included geologist Steven Forman of the University of Illinois, managed to do it with crystals. They were able to date sediments from Buttermilk Creek by measuring the amount of light trapped within quartz and feldspar crystals typically found in clay4.

This technique, developed at Simon Fraser University by David Huntley in the 1980s, is based on the fact that certain elements in soil naturally produce a small amount of radioactive energy. Other materials, like quartz and feldspar, absorb this energy, releasing it slowly for some time after as luminescence. This cycle gets reset every time the material is exposed to light, because light energy swamps the very small amount of radioactivity coming from the surrounding elements. So, if you have a good sample of soil with a known radioactive profile, it is possible to work out the last time the stuff was out in the sun.

Beautiful in concept, and useful, too. Luminescence has been used to date Stone Age cave dwellings in South Africa, building materials from the Old Kingdom in Egypt, and prehistoric settlements on the island of Andros in the Aegean Sea5-7. Luminescence also tells us that Western Australians were painting art on rocks more than 17 000 years ago, thanks to nearby wasp nests that tended to fill with quartz sand before fossilizing8.

And Buttermilk Creek? The luminescence data proved that the oldest artifacts there are from 15 500 years ago, far too early to be Clovis in origin1. Optical dating is proof that long-standing theories can be overturned – even the ones of poets – and that science can be stirring.