One thing I’ve felt a little bad about here is the amount of shit, literally, that my field assistant Rob has had to deal with. He’s the one who has to hold each peacock still in his lap for about an hour while I carefully measure and apply stickers to all of their tail feathers, and he takes a hit whenever the peacocks do what any reasonable animal would do when restrained by a giant predator. And these hits happen frequently.

I realize that this kind of mess is all just part of field biology (and I tried to give Rob some advance warning to this effect). However, it’s one thing to talk about it and another thing entirely to be on the receiving end. I hope Rob was happy today when we came across a little mystery in the park that had me get my hands a little dirty as well – the mangled remains of a peacock tail, the first direct evidence of peacock predation that I’ve ever seen

The specimen had a few eyespot feathers and the longest train feathers intact, along with some of the golden-coloured lower back feathers and (brace yourself) the last few fleshy vertebrae. I dutifully checked through the train to make sure that it was not one of our banded males (we sample the longest 5 train feathers from all of them, so if this was a banded male I would have found evidence of this), and then I took all of the eyespot feathers I could find. This afternoon, I returned to the scene after realizing that I could measure the length of the tail as well. A quick check of the tape measure (101 cm) confirmed that this was definitely not one of our banded birds (all had tails well over 115 cm). 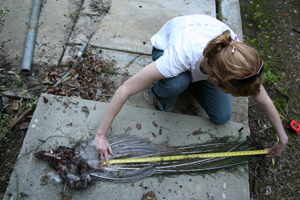 Biology nerds might also be interested to know that the most of the eyespot feathers were missing from the tail (only the very longest and very shortest feathers were there). My guess is that the others were lost in the struggle, evidence that this bird may have indeed been caught by the tail.