The best way to describe my experiences here so far would be (consistent with my history): extremely lucky. Last fall I had managed to find a furnished room for rent at a ridiculously low rate just a couple of miles from the Arboretum, but had no idea what to expect since my contact with the landlord was limited to email. When Rob and I arrived in town two weeks ago, directions in hand, we drove past a number of elaborate looking houses on the way to our rental accommodations. As we passed gated lawns adorned with fountains and statues with our destination just blocks away we were getting quite excited.

Our house, it turns out, is rather modest for the neighbourhood. Our landlord, Shih, teaches math at a local high school. She is, as Rob describes, an alarm-system enthusiast and also a collector of old newspapers and other bizarre items that fill every available cupboard and surface in our bedroom. Luckily for us she is also quite a wonderful lady; she’s fed us several times, given us gifts of crackers and towels and even granted Rob responsibility for household affairs when she went away for a few days last week. 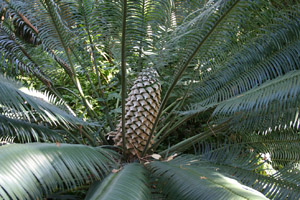 Our luck continued as we started our first day of work at the Los Angeles Arboretum – it may be the most idyllic place to work on peafowl conceivable. The park is full of interesting gardens and trees of exotic proportions, including some positively prehistoric looking cycads, a bamboo forest full of hidden treasures, and an orange grove (and I can assure you that the fruit is delicious). Visitors are encouraged to venture away from the paths, and when you do you often come across park benches nestled in shady out-of-the-way places that you wouldn’t have noticed otherwise. It is exactly the kind of place where I would love to bring a book and spend the entire day reading outside.

We also saw a great deal of peafowl the first day at the Arboretum- and learned from the park director that these birds are descended from two pairs imported into the area by Arcadia’s founder (J. ‘Lucky’ Baldwin) a century ago. The population has grown to over 200 and is now spread throughout the residential neighbourhoods surrounding the Arboretum. While the birds apparently range quite widely for most of the year, they descend upon the Arboretum at the start of every breeding season (which, as it turns out, is exactly now) as it provides a safe-haven for lekking.

Driving around Arcadia, you can’t help but notice evidence of peafowl as the official city mascot everywhere – from the stylized peacock that adorns all of the Arcadia street signs and the small park next door to our house, to the logos for the Arcadia chamber of commerce and golf course, to the giant peacock fountain in the large central city park, to (most hilariously) a massive peacock stained glass window over the door of one Arcadia mansion.

We spent some time exploring the residential neighbourhoods around the park, and saw plenty of peafowl lazing on the well-groomed lawns and idly crossing the streets (Arcadia has even published a pamphlet explaining how to live in harmony with these beasts, here). Unfortunately, we can’t access the suburban birds for sampling because feeding and catching peafowl is prohibited under Arcadia bylaws. However, we’ve been granted free reign of the birds on the private park property, and I’ll write more about our efforts with them soon!