Toxoplasma gondii is a protozoan parasite that spends half of its life cycle in cats. It also goes through an asexual phase where the parasite hunkers down in a tough, cyst-like form, and can spread via other host mammals and birds. Typically, these are mice and rats, since hanging out in cat prey is an ideal way for the parasite to get back into a cat and complete the sexual phase of its life cycle.

As part of this strategy, Toxoplasma induces a drug-like effect on rodents, causing them to lose their normal risk aversion and fear responses. Evolutionary epidemiologist Joanne Webster showed how infected rats actually become attracted to cat scent, in a form of suicide by parasite 8. Webster’s experiments with Toxoplasma and rats are a reminder that natural selection can produce some pretty grisly things, and that this can make sense, so long as you think in terms of who is benefiting. Toxoplasma isn’t the only parasite with a mind control strategy: those familiar with the BBC Planet Earth series might recall these time lapse shots of Cordyceps fungus and the odd effects these parasites have on ant behaviour.

Toxoplasma gondii can also infect humans. There’s a good chance you’ve had it. In most countries, about 20–60% of the population have harboured this protozoan at one time or another, depending on climate, hygiene and cooking practices (about 12% have had it in the US)9,10. In most people, the infection goes unnoticed or causes mild flu-like symptoms, but it can occasionally have serious effects on the mind.

I first heard about the parasite in a psychology course, because toxoplasmosis is linked to schizophrenia. In 2003, medical researchers discovered that people who suffer from this mental illness are three times more likely to have Toxoplasma antibodies, which would indicate past infection11. Subsequent research showed that exposure to the parasite during pregnancy is a contributing cause for schizophrenia, increasing the likelihood that the fetus will develop the condition as an adult12. Something is going on between this parasite, or our antibodies to it, and the developing brain.

Intriguingly, these psychological effects in humans seem to be connected to the parasite’s strategic manipulations of rat behaviour. A 2009 study of the Toxoplasma genome turned up a potential source: an enzyme that looks very similar to one that produces dopamine in the mammalian brain13. This neurotransmitter has a key role regulating movement, motivation and reward in animals. When people develop schizophrenia, the dopamine system goes haywire; some antipsychotic drugs work by blocking dopamine function. And Joanne Webster has found that these same schizophrenia drugs can cure Toxoplasma-infected rats of their suicidal feline attraction – as effectively as treating the actual parasitic infection14. Lately, researchers are starting to ask whether Toxoplasma might be causing other dopamine-based illnesses in humans. For example, in 2010 it was reported that Parkinson’s patients, like those with schizophrenia, are much more likely to have Toxoplasma antibodies than the general population15.

The parasite has other, milder effects on human psychology, but they’re no less insidious. Toxoplasma males men more jealous, suspicious and emotionally unstable; it can have the opposite effect on women, but it increases anxiety for both sexes16. There is a movie on this, “Kitty Kitty“, currently hitting the festival circuit.

It gets creepier. People with latent Toxoplasma infections are substantially more likely to get into car accidents, possibly due to the parasite’s effect on reaction times17,18. If you have a heterozygous positive Rh blood type, you are protected from some of the negative effects of Toxoplasma. Researchers have found that people with this blood type who have been infected in the past do not experience the troubling increase in accidents19.

Some think the psychological impact of Toxoplasma could scale up to the level of culture. Kevin Lafferty, a parasitologist with the US Geological Survey in Santa Barbara, California, used epidemiological records to compare the prevalence of Toxoplasma infection in different countries with citizens’ personalities and outlook on life10. He found a surprising correlation: countries with high infection rates like France and Brazil tend to have more neuroticism, uncertainty avoidance, and traditional sex roles compared to low infection countries like the UK, Norway and Thailand.

Of course, this isn’t enough to say with certainty that Toxoplasma is the source of cultural differences; it could be that some other common practice or set of traditions leads to both the increased Toxoplasma infection as well as the social rules and norms in these countries. But there’s no denying that cats resonate with us culturally, perhaps more so than dogs. They have infected our language with their lascivious ways: caterwauling, letting the cat out of the bag, cat fight, sex kitten, tom cat, pussy, catting around, catty…

Could this part of culture, our attraction to cats far beyond their utility, also be caused by Toxoplasma? Maybe infected people turn into the cat-obsessed, like so many suicidal rats.

I did my own investigation with Google’s Insights for Search, and if you haven’t tried it, wait until you can afford to fritter some time away. All you have to do is enter one (or a few) search terms that you want to compare. The tool tells you how popular they were as a percentage of the maximum over your sample – and you can break the results down by date and location.

It turns out that people are looking up cats, and cat images, in vast numbers. Globally, cats are less popular than the Olympics, since the term “cats” gets searched at about 20-50% the rate of “olympics” whenever the games are on:

They are also less popular than dogs, holding steady at about 60% of the rate for the other pet:

But cats beat Obama in 2010. They were 4 times more popular than the US president last year:

So: are people in countries with a high prevalence of Toxoplasma infection seeking out cats? I chose the term “clock” as my standard of comparison, to control for geographic differences in overall internet use. If Toxoplasma makes people search for felines, we should see an increase in the ratio of “cat” to “clock” searches with increasing infection rate. I used data from Kevin Lafferty’s study to get the Toxoplasma prevalence for 20 countries around the world. Here’s what I got: 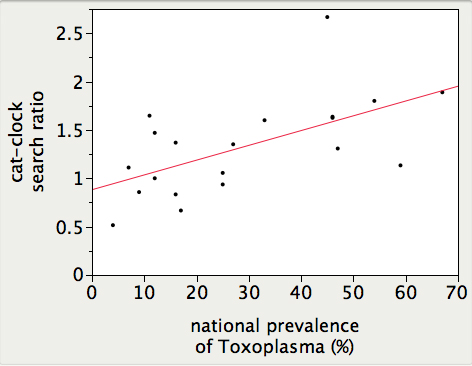 A close (and statistically significant) relationship. You might say that infected cat lovers pay more attention to felines than the time of day online.

Of course, it could be that the prevalence of cat ownership in these countries causes both of these things. Makes me wonder what else Google’s Insights might be good for, though.