Many linguists would claim that grammar is what sets human language apart from anything else in the animal world. Some would disagree – bird song, for example, can be quite complex and it is thought that there might be some rules involved in its underlying structure. The question is, at what level of complexity does this ‘grammar’ occur?

First, some grammatical background: the kind of structure we are talking about here is called recursive grammar. This is the ability to insert phrases or clauses within other clauses. For example, we humans can say, “The bird sang from his perch”, or we can go further and say, “The bird, who had just caught a worm, sang from his perch”. We can go further still: “The bird, who had just caught a worm that was wriggling in the dirt, sang from his perch”. It is theoretically possible to keep on adding to a sentence like this forever, and come up with something that is infinitely long (but technically understandable).

In a recent paper in the journal Nature, researchers working with starlings claim to have demonstrated that, much like humans, birds can understand recursive grammar. Their methods involved creating a series of artificial songs following two different patterns: half of the songs had a novel element embedded into the middle of the song, while in the other half this element was added to the beginning or the end of the song. The results were that starlings could eventually learn to distinguish the two song-structure types.

While these results are definitely interesting, they don’t justify any sweeping conclusions about starling grammar (not yet, anyways). The ability to remember and distinguish different song patterns is surely different from the ability to use the patterns for the communication of specific information. The authors of the study have countered that even if the birds are simply using memory to distinguish the song-types, this behaviour is still “remarkable and previously thought beyond the realm of non-human abilities.” 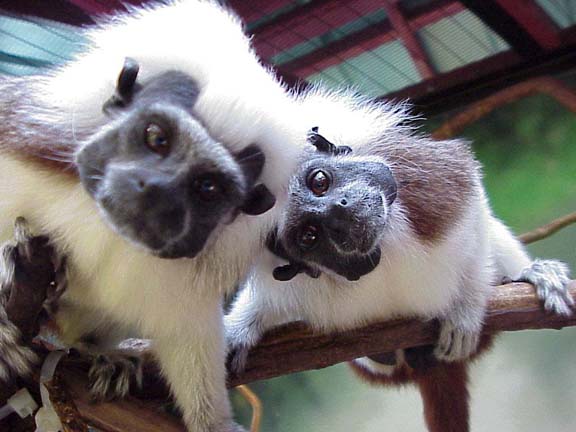 Interestingly, a similar study using cotton-top tamarins seems to demonstrate that recursive grammar is beyond the ability of these monkeys. This research involved teaching the monkeys an artificial grammar using recorded sounds, and testing whether or not certain deviations from the learned sound-order captured the monkeys’ attention. Apparently, the monkeys could recognize recordings that violated simple grammatical rules, but they did not respond to recordings that violated recursive grammar.

The monkey study was published in the journal Science, and in the same issue the psychologist David Premack provides several reasons why he thinks animals have not evolved language in the human sense. Premack believes that besides the lack of complex grammar, the lack of teaching, imitation, and voluntary control of sensory-motor systems is what sets animal communication apart from human language. But I’m not so sure that animals like primates and birds lack imitation and teaching. In any case, it would be interesting to know more about the patterns and structures underlying the whole spectrum of animal communication.

Here is a National Geographic article on the cotton-top tamarin study, and a Seed magazine article on starling grammar.