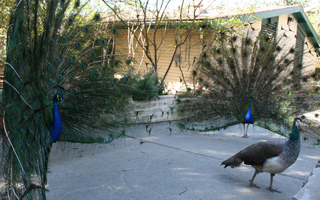 It doesn’t take an expert to realize that the extravagant song, dance and plumage of male birds (see videos in my last post) are intended as some sort of communication to potential mates. However, the insight that sexual ornaments are signals was a critical one that provided a mechanism for sexual selection and vindicated one of Darwin’s most important ideas. Darwin, of course, was the first to point out that extravagant male traits persist despite their probable costs because females prefer them. The example Darwin often referred to is the enormous and flashy tail of the male peacock (you can see for yourself at this online collection of all of Darwin’s writings).

It wasn’t until the 1970s when Amotz Zahavi suggested his handicap principle that we really began to understand why females prefer certain males. Zahavi’s idea was that extravagant sexual ornaments should be thought of as signals, and these signals are not selected in spite of their costliness but because of their costliness. A costly signal is an honest one; only the highest quality males can express it to its fullest extent. Females should be selected to prefer traits that are costly for males to produce because preference for an honest signal should yield the most benefits. Preference for a dishonest signal (one that a low-quality male could fake) should be weeded out by natural selection.

Darwinians had to wait a long time for honest signaling theory, and they had to wait even longer for someone to test these ideas with respect to the peacock. In the late 1980s and early Marion Petrie began to study what peahens actually look for in a mate. Following the love lives of peafowl in a London zoo, Petrie found a correlation between the number of eye-spots on a male tail and the number of peahens willing to mate with him.

Petrie also looked at the quality of peacock offspring, and found that the larger the eye-spots of a peacock dad, the better his offspring survive, suggesting that males with more extravagant tails are high quality individuals. This means that peahens gain a genetic benefit for their offspring by mating with well-plumed males. So the tail of the peacock would appear to be an honest signal of male quality rather than an arbitrary preference after all.

One other intriguing result of the work done by Petrie and her colleagues is that peacocks tend to display close to their kin. This suggests that kin selection has shaped males to aid their kin in attracting more females, and may provide a reason why poor-quality males who don’t get any mates bother to display at all. Interestingly, experimental work has shown that peacocks are able to recognize their brothers even when they do not hatch from the same nest. My question is: is it possible that birds might use some sort of visual cues that involve plumage for kin recognition?