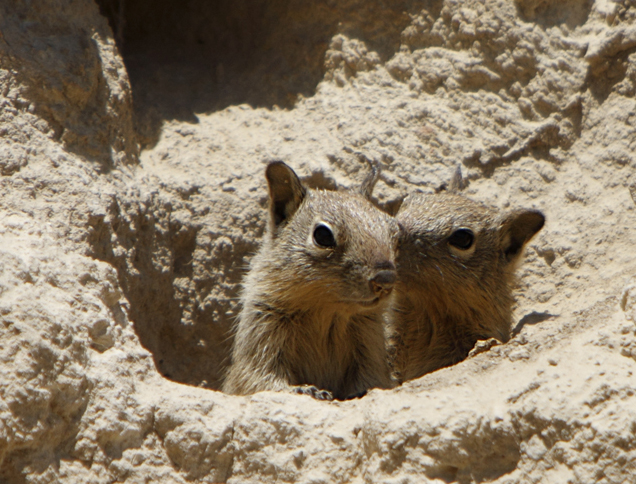 To this end, Pollard and Blumstein focused on eight marmot species that had been studied extensively in the wild. They assembled demographic data from previous studies to estimate typical social group sizes, and for each of the eight focal species, Pollard recorded examples of 20 alarm calls from each 10 different individuals. A PhD-worthy total of 1600 marmot tracks. Pollard was able to extract a daunting list of acoustic parameters from these recordings, including the basics like overall call duration, bandwidth and peak frequency, as well as the presence of sidebands and subharmonics, and some marmot idiosyncrasies like the number of chucks, chirps, click-chirps, grumbles and snarfs. Not to mention their order, and the gaps between them.

From all of these acoustic variables, Pollard calculated a single number that summarizes how easy it is to sort out the 10 different individuals using only the information encoded in their calls. This is Beecher’s information statistic or “Hs”, calculated for each of the eight marmot species. The Vienna Boys’ Choir might score pretty low on Beecher’s number, while your ragtag community choir would probably do better (though they might sound a lot worse).

Pollard and Blumstein examined the relationship between group size and Beecher’s number in the context of the marmot evolutionary tree, based on two recent genetic phylogenies of the genus6,7. The reason? They wanted to control for the possibility that some marmot species have both large group size and distinctive voices just by chance – because a set of species happens to share a common ancestor that also had both of these traits. Pollard and Blumstein accounted for this using the traditional method of independent contrasts, which tests for correlated changes in two characteristics at each node in an evolutionary tree.

As you can see in the figure below, there is a very close correlation between social group size and vocal uniqueness for the eight marmot species. 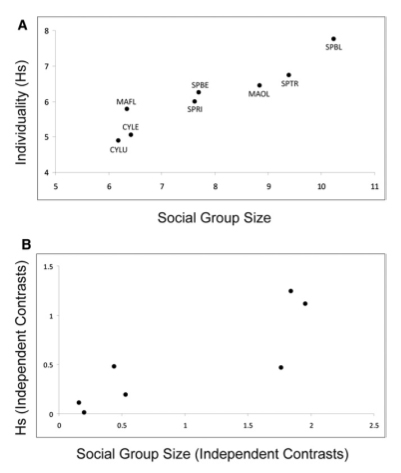 (A) Relationship between typical group size and vocal individuality (Hs) for eight marmot species. (B) This pattern holds when controlling for evolutionary relationships between species, using independent contrasts to look at the changes in these traits at each node in the tree. Taken from Figure 2 in Pollard and Blumstein1.

Pollard and Blumstein also considered an alternative explanation, that social complexity is really the driving force behind this pattern. Social complexity refers to the composition of groups in terms of the age and sex of individual members. Variability in this group structure may, or may not, increase with raw group size – but like group size, social complexity can be estimated using the demographic data that Pollard and Blumstein had dug up from previous studies. They showed that marmot species with larger groups are not necessarily any more complex in terms of group structure. Furthermore, the most common metrics of social complexity do not predict vocal uniqueness the way group size does in the marmot genus.

These results draw attention to a couple of issues. In the evolution of individuality, the crowd is king. Pollard and Blumstein predict that recognition signals should be common in species with large, but stable, groupings where it pays to stand out. In alarm calling marmots, the advantage of being special might have to do with nepotism and the importance of maintaining a reputation as a reliable caller in the burrow, since it’s thought that these rodents trade favours by playing sentinel for group-mates. In other organisms, individuality might evolve for different reasons, but the group size pattern should hold, even when the individuals doing the discriminating are few or when they belong to an entirely different species.

There is one other big question here that is ripe for further study. Which came first, individuality or the mental capacity to keep track of the other individuals in the group?

Do identity signals evolve by exploiting phenotypic variability that is already there, enhancing neutral variation or amplifying baseline noise? This would parallel what we have done to domesticated dogs, horses, cattle and sheep. These animals display a much greater range of coat colours and patterns than their wild relatives. In domestication, this was probably the result of at least two things: relaxed selection for camouflage, since we provide these animals with protection, in combination with the intentional choice of the odd-looking individuals for breeding. For some other extreme examples, take a look at what we’ve done to chickens, pigeons and, believe it or not, fancy mice.

What about the other side of the question: do these signals lead to coevolution of the recognition system? For example, are marmots with larger group sizes also better at remembering unique chirps and grumbles than their less gregarious cousins? It should be possible to compare this ability among the eight species in Pollard’s study, although it won’t be easy. And finally, though we can’t tell from Pollard and Blumstein’s data, since all eight species presumably use identity cues, it would be interesting to know whether the ancestral ground squirrels lacked a unique voice or the ability to use it.