As Hollywood gets dolled up for the Oscars, fans at home might surprised to learn that a field biologist could tell us a thing or two about the winning films. Dan Blumstein, a behavioural ecologist who works, quite fittingly, at UCLA, is an expert on yellow-bellied marmots. He might also be the person to turn to if you want to predict the win in the “Best Original Score” category this weekend.

Although Blumstein does most of his work with wild marmots in the Rocky Mountains of Colorado, studying several facets of their behaviour and evolution, he recently published a paper on the science of movie soundtracks1. With Richard Davitian and Peter Kaye from the School of Music at Kingston University in the UK, Blumstein applied techniques from his research on marmot vocal communication to an entirely new question: why are Hollywood moviemakers so good at manipulating our emotions? The results pick up on a common theme in the way humans and other animals use sound.

Blumstein and his coauthors were interested in testing whether emotionally intense movie scenes contain a disproportionate amount of nonlinear sound. Most biological sound is linear, meaning that it can be broken down in to its component waves. This property is what allows us to follow a conversation at a cocktail party, or to pick out a particular sound in any realistic environment, where there are often several competing signals. Nonlinear phenomena occur when sound waves interact, creating wave-forms that cannot be decomposed by the listener. This is noise, although it need not be loud; the term here refers to irregularities in the wave-form rather than overall volume level. Guitar distortion, sonic booms and white noise are all examples of nonlinear sound phenomena. These types of sounds can include abrupt transitions in amplitude and frequency, subharmonics and chaotic elements in their wave patterns.

Many animals – including mammals – have nonlinear elements in their vocalizations, and biologist have noticed that this is especially true of alarm calls and fear screams1,2. There may be a good reason for this. It is thought that nonlinear sounds, with chaotic and abrupt changes, are unpredictable and thus especially hard to ignore. In general, it may be difficult for the brain to habituate to these sounds, preventing them from blending into the background2. Nonlinear sounds might therefore be good signals of urgency. Consistent with this idea, scientists have shown that the cries of human infants become increasingly nonlinear as other, visual signals of pain and distress increase for babies (such as squirming and making faces)3. Dan Blumstein has shown that the screams of newborn yellow-bellied marmot pups contain similar nonlinear elements4. Interestingly, the begging calls of nestling birds also tend to be nonlinear sounds (e.g., magpies5).

Experimental studies show that marmots respond with greater concern when a nonlinear blip of white noise is added to the alarm call adults normally use to warn others of a nearby predator6. In meerkats, playback experiments using a range of natural alarm calls have also demonstrated that animals take the message more seriously when the calls contain nonlinear elements7.

Nonlinear elements in the “coo” calls of a rhesus macaque monkey. This spectrogram shows sound frequency versus time for series of four consecutive calls. The first “coo” call is linear, but the following three have additional subharmonic nonlinear elements, making the calls sound increasingly harsh. From Fitch et al. 2002.2 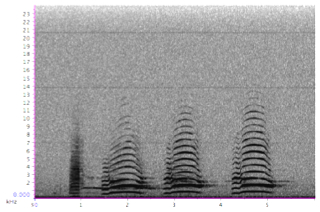 Sound spectrogram of a series of peacock “ka” calls I recorded at the Los Angeles Arboretum in 2009. These sounds are loud, but not very noisy: the acoustics are mostly linear.

Blumstein and his coauthors borrowed a common tool from bioacoustics and snuck it in to the movies: the analysis of spectrograms like the ones shown above. Using a sample of over 100 popular movies from “Casablanca” to “Iron Man”, the researchers extracted a 30-second sound clip from a single, highly emotional scene in each movie, and then counted the nonlinear elements in the spectrogram of that clip. These nonlinearities ranged from musical noise to sound effects, abrupt sound changes, and human screams. 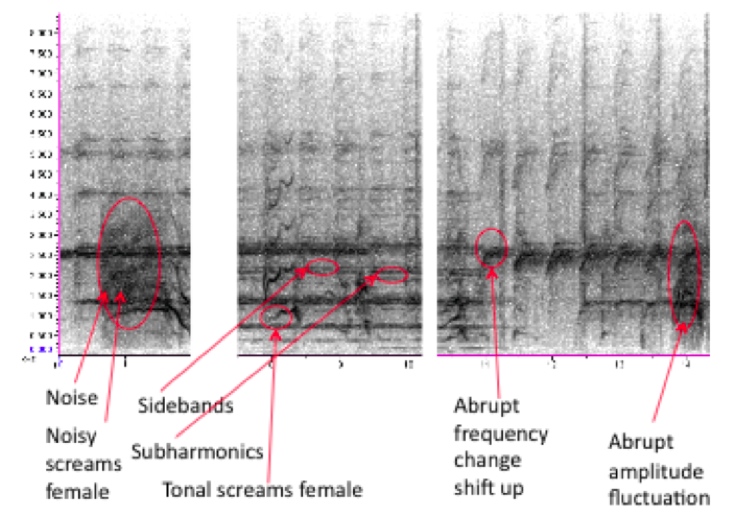 Sound spectrogram from the movie Psycho, illustrating some of the nonlinear elements Blumstein and coauthors counted in their analysis1.

The authors compared their results across different movie genres. They found evidence that filmmakers use nonlinear sounds in in different ways, depending on the emotions they want to convey. Perhaps not surprisingly, certain genres use a lot of nonlinear vocalizations: horror movies have a lot of female screams, whereas males do most of the screaming in action and adventure flicks like Spiderman 2.

More interestingly, the other nonlinear elements also show genre-specific patterns. Dramatic movies have a disproportionate amount of abrupt frequency changes. At the same time, dramatic scores tend to have less musical noise and fewer sound effects when compared to other movie types.

The authors conclude that filmmakers use nonlinear sounds strategically to manipulate audience emotions. On the one hand, this is a fascinating hint at the way artists and musicians might exploit deeply-ingrained aspects of our evolved communication systems. There is evidence that the converse can work, too. For example, composer David Teie wrote cello music for cotton-top tamarin monkeys based on their natural calls, in collaboration with psychologist Charles Snowdon. Teie and Snowdon showed that this tamarin-based music had a much greater effect on the monkeys than standard human cello compositions8.

In hindsight, though, the results of Dan Blumstein’s movie score analysis are not surprising. Of course different movie genres use noise in different ways; any musician or sound engineer could have told us that beforehand. The inclusion of human screams in the analysis also seems irrelevant here. The value of this study is that it demonstrates the extension of nonlinear sound into communication functions beyond our natural vocalizations – we don’t need data to tell us that real screams are scary.

Several questions remain. For one thing, it is not clear how the authors chose the 30-second clips from each movie; their methods state that they used an “iconographic scene that epitomized the film’s genre”1. Are these results specific to emotionally intense scenes, or are nonlinear elements used throughout movies in genre-specific ways? Another area for further study is the effect of nonlinear sounds on the audience. Can musical noise and nonlinear analogues be just as evocative, or perhaps even more so, than natural human vocalizations?

I’m also curious about the process of composing a movie score. Do filmmakers consciously add nonlinear elements for effect in certain scenes, perhaps even at precise moments – or is it more of a trial and error process of figuring out what works? On a related note, it would be interesting to see how this characteristic has evolved over Hollywood history, something that Blumstein could probably look at with the data in his published study. If the use of nonlinear effects has increased over the years, is it due to advances in sound technology? Or, are filmmakers getting better at tugging our acoustic heartstrings, whether consciously or not?

Of course, one question trumps all others this weekend. Are scores with more nonlinear elements Oscar-worthy? I looked up the award stats for the 35 dramatic movies in Blumstein’s study. It was a competitive pool, with an average of 3 Academy Awards per film; this was no accident since the authors selected only the most popular movies for their sample. Five of these films had won an Oscar for best score, and about a third of them had nominations in the category, suggesting that nonlinear sound works on the Academy, too.

Watch Dan Blumstein’s talk “The Sound of Fear” on Youtube.