I think so. Tthere are a few things about mustaches that suggest that they might be “for” something. They are sexually dimorphic – adult men have them, but women generally do not. This is a tip-off that some reproductive function is probably involved. Also, mustaches appear to be a derived trait in humans, showing up fairly recently in our evolutionary history. Chimps, gorillas and orangutans – our closest primate relatives – have bare upper lips. We gained mustaches, along with thick hair in a few other places, despite having lost the all-over body fur of our shared primate ancestor.

There is another big clue that mustaches might be adaptive: they abound in the animal kingdom. From the three-wattled bell bird to the emporer tamarin, a variety of distantly related species have evolved furry and fleshy facial appendages. Take a look at the inca tern, mustached tamarin, northern flicker, helmeted guineafowl, and the Mexican molly fish. This could be convergence: the independent evolution of similar structures to perform the same function. Bat wings are convergent with bird wings; perhaps this is also true of bat and bird mustaches.

Whiskers and bristles often have a sensory function. But the thicker, more colourful facial appendages and markings found in these animals are more like human mustaches. They are often absent in females, or enhanced in adult males, and seem to play a special role in courtship and communication. 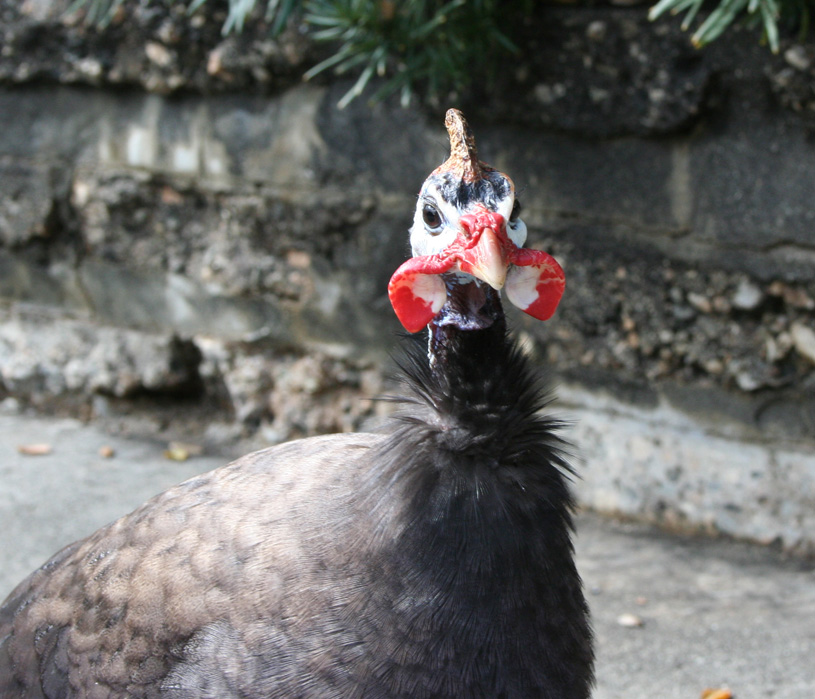 Indeed, scientific research on animal mustaches supports a signal function. In northern flicker woodpeckers, males will attack their own mate as though she is a rival if you glue a fake mustache on her3. In these birds, the yellow-shafted and red-shafted subspecies wear distinct black and red mustaches. Each prefers to mate with its own type, and mustache colour might play a role4. In some birds, long mustaches are a signal of male prowess. Great bustard males with longer mustaches are able to spend more of their time displaying5. For inca terns, mustache length is a reliable signal of health, immune condition, and mating status6. In the Mexican molly fish, females prefer to associate with mustachioed males; these fish also use their bristly upper lip to stimulate females during courtship7.

So far so good. Movember anecdotes aside, it seems reasonable to suppose that mustaches are a signal of dominance, age and status in human males. Indeed, there is evidence from psychology that women perceive male faces as older, more aggressive and more masculine when they have a full beard8. We have our hypothesis, so it’s on to the test. Are mustaches used for this purpose?

Some people think so. Nick Barber has published some intriguing mustache research. He compared demographic data on the marriage market in Britain over 1842-1971 with the rise and fall of manly face fashions, measured by tallying the beards, sideburns and mustaches pictured in the Illustrated London News9. He found that men’s facial hair tended to rise and fall with the marriage market. The more single men there were, the hairier. Barber found the opposite effect when he examined the number of children born outside of wedlock. Men tended to go bare-faced at times when illegitimate birth rates were high.

In fact, Barber noted that these effects was mostly due to the mustache, which had a much tighter relationship with the marriage market than either beards or sideburns (and surprisingly, there was no correlation between these different face fashions).

Barber interpreted this as evidence that mustaches give men an edge in romantic rivalry when women are scarce. He suggests that when women are plentiful, men actually do better without mustaches, since a clean-shaven face could suggest trustworthiness and a low probability of cheating9. 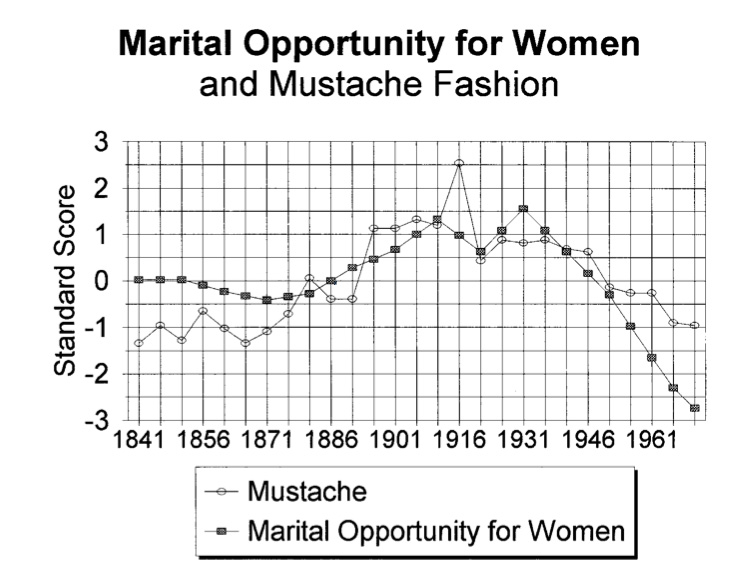 Mustache prevalence tracks the proportion of single men in Britain over time. From Barber 20019.

This is all pretty seductive, but there are alternative explanations that Barber failed to consider. The number of young, single men in Britain would have been largely influenced by wars. Couldn’t this also influence facial hair, both directly through grooming rules for servicemen, and indirectly through the the effect of wars on other economic and cultural trends?

Something else is fishy here, too. What if the data had shown the opposite trend, that mustaches decreased when the market was flooded with single men? Would Barber have simply concluded that mustaches always serve a deceptive function, and that men compete to seem more trustworthy when women are scarce and therefore choosy?

There is a great deal more to be done before we can accept the mustache-as-status-signal hypothesis.

For one thing, did our ancestors also use mustaches for this purpose? Evidence from ancient mummies preserved in ice and peat bogs shows that pre-historic men also wore trimmed beards and mustaches10, but this says little about how hairiness was viewed back then. We might start by looking at the role of male facial hair in modern indigenous societies.

What about alternative explanations for mustache function? Beards might keep the face warm, but this raises the question of why women lack them. We could be on to something here. Maybe selection for a youthful, hairless appearance in women is part of this story11. Indeed, women can have hairy upper lips after menopause, some more than others. Clearly, hormonal control is part of mustache expression. We need to know the sequence of how this came about in our evolutionary history.

Are there non-adaptive alternatives? Maybe the mustache is a “spandrel” of other traits, such as patterns of follicular development, that exist in both sexes but are reduced in women. Nose hairs are adaptive; could the increased density of hair on the upper lip be an extension of this? We need more details on the genetics and development of human mustaches.

We could start by investigating the marked differences between human populations in the tendency to grow mustaches. How do genes for follicular development, along with other interacting genetic and hormonal factors, contribute?

Of course, even if manly mustaches arose for non-adaptive reasons, it would not exclude the possibility that they have been maintained, or even enhanced, over time for their signal function.

Once we understand which genes were involved, there are techniques that we could use to test for positive selection on mustaches in our ancestry. We would just have to sequence a large number of people from some hairy-lipped modern populations: no small feat. These population genetic methods have been used to demonstrate positive selection on a number of important human traits, such as the ability to digest cow’s milk with the enzyme lactase in Europeans and pastoralist Africans12, and altered hemoglobin levels in high-altitude Tibetans13.

It almost makes me want to quit peafowl and take on mustaches instead.