The Los Angeles Arboretum is one of the most beautiful places I have been. Where else can you see six species of hummingbird zooming from perch to flower, an Asian red-whiskered bulbul nesting beside a dancing peacock, with noisy flocks of parakeets commuting overhead? Even the introduced species (on this list, all but the hummingbirds) are beautiful.

So it was fitting right after I got back from LA to read the news that 30 new, never-before-seen species of flies were just discovered in the city. Read more about it here. And how did the discoverers identify these flies as unique? By the gnarly shapes and bristles of their genitalia. These traits can help define species in other groups too, like bats and primates. 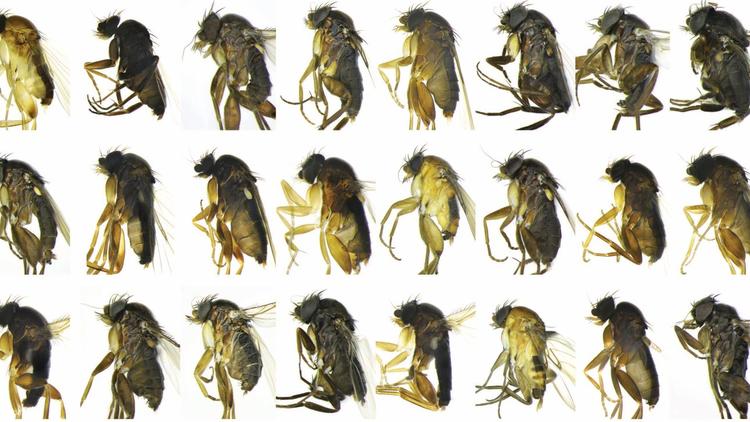 One of the most incredible things about peafowl is how well these birds thrive in the suburbs. There were hundreds in Arcadia, CA, where I studied them, and every once in a while I hear about some other town where they’ve taken over – Orange County, Palos Verdes, Miami – they even disperse and occasionally pop up somewhere new (like here, or here). I’ve been told that in India (where the species is originally from), flocks also tend to settle down in villages. (And the name for a group of peafowl? A muster!) And peacocks are now on the cover of a book on urban birds1.

So what makes peafowl so much better at urban living than other, similar species?

It could be that they’re catholic about their diets, or that they’re tolerant of a broad range of environmental conditions2. Other research has suggested that, in mammals at least, successful invaders tend to have relatively large brains3 – possibly because a large brain confers the ability to respond flexibly to new situations. American crows fit this theory, as an urban success story with relatively large brains. But peafowl are some of the smallest brained birds out there, when you consider brain size relative to body size – and pigeons, starling and house sparrows aren’t particularly well-endowed, either. So what if it has more to do with how they use their brains to adapt?

A new study points to an intriguing benefit of city life for some birds, and it has me wondering about learning as a mode of urban adaptation. Apparently, some urban birds use cigarette butts to build their nests – and researchers have now shown that the cigarette butts actually improve the living conditions for young birds.