They’re filming a movie on our field site right now. Apparently this isn’t out of the ordinary; one of the Jurassic Park movies and the climax from Anaconda were both shot at the Arboretum, for instance.

We’ve known this for some time, since a work crew has been gradually building a stadium on the main lawn of the Arboretum, on top of what is usually a large fountain (seems like a strange choice to me… fortunately, this area is not part of the lek so their activities won’t interfere with the peacocks). Rob found out a while ago that the stadium will be used for “a teen movie about cheerleaders”.

I learned some more details the other day. I was standing near the front gate, observing two peacocks that display on the roof of the Arboretum office building. Binoculars and notebook in hand, dressed ridiculously for the mild weather in a toque and heavy fleece, to most I would look like a crazy person taking notes about a roof. A woman approached me and struck up a conversation: apparently she was some sort of Hollywood production person on a scouting mission, and something about my appearance made her think that I was in production too. She was looking for a waterfall for a scene in an upcoming episode of Criminal Minds. She wanted to know if I was working on Fired Up, since she knew some people who were involved with it. I explained that I was actually watching the peacocks, secretly happy that I had found out the name of our cheerleading movie.

As soon as we got home, I searched for Fired Up on IMDB and learned that was a movie about “two guys who sign up for a cheerleaders’ camp in a desperate attempt to pick up girls”. And, as if this wasn’t ridiculous enough, it was billed as starring Patrick Swayze.

Our hopes of running in to the man who inspired the Patrick Swayze Express were dashed, though, a few days later. Rob had asked one of the set security guards about Swayze (and received a somewhat confused response); when we checked the IMDB site for Fired Up again, it had changed. The new site suggested that it’s most awesome (and sole recognizable) star had backed out – I think Rob’s questions might have even brought about the web update. But, as proof of how close we nearly came to Swayze, here is the old version of the site: 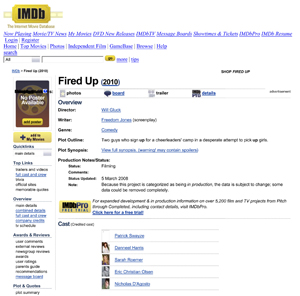