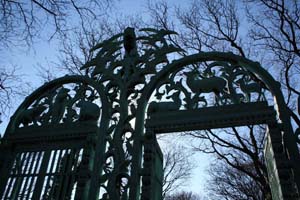 On Wednesday morning I rolled out of bed at 5:45 am (not as difficult for me as you might think) to drive to the Bronx Zoo for a brief visit. I’ve been corresponding with the curator of birds there for some time. She had approved my research proposal this fall and wanted me to see the peafowl and the layout of the zoo, to decide whether sampling the birds there would be feasible. Unfortunately for me I had no idea when we arranged this visit that Wednesday would bring a terrible snow/freezing rain/wind storm to upstate New York. I also had no idea that Americans are so terrible at keeping their roads salted; as soon as I crossed the border the roads went from pleasantly wet to treacherous and covered in solid sheets of ice. Happily for me there weren’t many cars on the road or I surely would have gotten in at least one accident; less happily, the drive from the border to Syracuse (normally 1.5 hours) took about 3.

I had arranged to meet Chris Sheppard (the curator) at 2 or 3 pm so that she could show me around the zoo before taking me to the ‘Tree Tops’ apartment, the accommodations for researchers on the zoo grounds where I would spend the night. Already running behind due to ice, I hit heavy traffic coming into the Bronx on the George Washington Bridge (making a 6 hour drive take 9, but feel like 12). And so, when I arrived at the zoo at 5 pm it was of course closed: the sun was setting, staff were leaving, and the rather high-strung security guard at the gate had no idea what to do with me. Already tired, nervous and frustrated about being so late, it didn’t help my state of mind that he sent me into the park shouting bizarre instructions to “only talk to Mary Evans”, implying to me that I’d be in serious danger if I spoke to anyone lurking about who wasn’t Mary Evans.

Unable to find Mary Evans, I was quite close to giving up and going to find a hotel in Connecticut when I ran into a lady who turned out to be the head of education at the zoo. She gave me some directions and the entry code to the Zoo administrative buildings (!) where eventually I managed to get in touch with Chris Sheppard, and find out how to get to Tree Tops. This is honestly the first time I’ve ever really thought I needed a cell phone (but in retrospect, if I had only taken someone along with me on the trip I probably would have had access to one).

Thursday morning I was scheduled for a guided tour of the top peafowl haunts in the park with a zookeeper at 7 am, who of course didn’t show up. Again, a cell phone may have helped here. However, I did manage to find a tour guide within the hour: Mark was a keeper with the bird department who habitually drives around the zoo in a green truck, throwing food at the birds from the windows and occasionally getting out to spread it around on the ground (standard zoo practice, I swear). Seeing the birds in the winter was quite a new experience for me: unlike the breeding season, they hand out in large mixed-sex groups and are so desperate for food that females are just as bold as males about approaching food sources (i.e. people). I learned a number of other useful and interesting things on this venture that made the stress of the previous day worthwhile:

After this excitement, I returned to the zoo administrative buildings to meet with Chris and a few of the other curators to discuss how feasible it would be for me to catch/observe the Bronx birds given the accessibility of their favourite places. I was left with the feeling that unbeknownst to me this meeting was actually an interview; the use of words like “corpuscular” being one clue. In any case, I think I passed, since the curators seemed quite positive and excited about the prospects for future peafowl research.