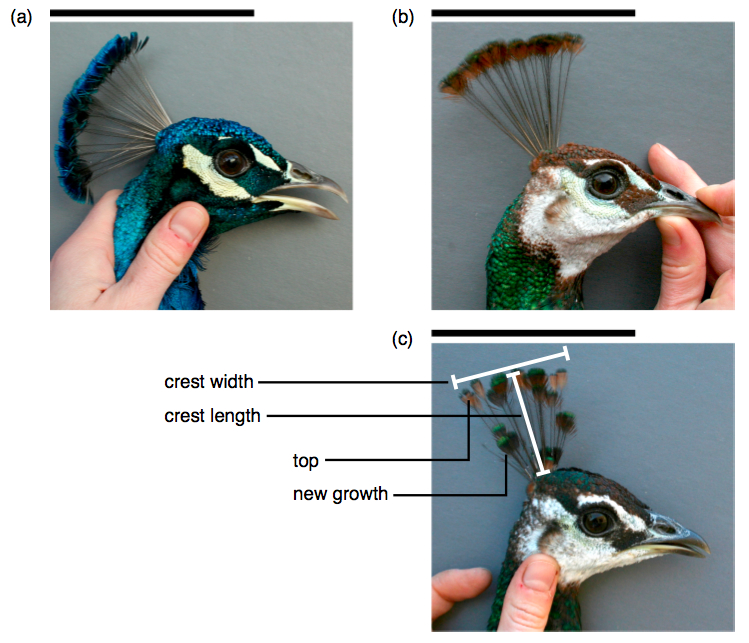 So peafowl don’t all look the same, provided you know what to look for. This sort of identity signalling goes on in many other species, sometimes to a remarkable degree; especially in cases where animals have to locate family members in a large group2. King penguin chicks in Antarctic colonies of thousands can pick out the individual vocalizations of their parents3; emperor penguins similarly use vocal cues to find their mate in the huddled masses without the help of any navigational landmarks4. Fur seals, also breeding in large colonies in Antarctica, do something similar as pups use vocal cues to find their mothers5 – and so do Mexican free-tailed bats, only they do it in caves shared with millions of neighbours6 . Seabirds breeding in dense colonies often have eggs with colours and patterns so variable they look like Easter decorations – allowing parents to locate their own offspring in a crowd7,8.

In species where competition and aggression are fierce, the ability to recognize a particular rival can also be an advantage2. American lobsters and rainbow trout can distinguish individuals that they have sparred with in the past9,10. Even insects like paper wasps and ants are able recognize other individuals in a dominance hierarchy, using unique visual and chemical cues11,12.

Elizabeth Tibbetts and James Dale wrote a nice review of animal identity signals that I was reading for my crest project2. Tibbetts was the first to show that insects can use visual signals for individual recognition, using paper wasps. This species has highly variable face colour patterns. Elizabeth Tibbetts painstakingly altered wasp faces with modeler’s paint (see painted faces of a related wasp), in an experiment confirming their ability to use these cues to tell one another apart11. James Dale works on the red-billed quelea of Africa. The world’s most abundant bird, with million-strong flocks that can decimate an entire wheat field, quelea display a wide range of plumage colours from yellow to deep red. They also have different patterns of face colouration, and James Dale thinks that patchy colours might function as identity signals in this species as well13.

What does this have to do with celebrities? Well, in their review, Tibbetts and Dale have some pictures of potential identity signals in different animals. All of the following images can be found in Figure 1 in their paper2.

Here are the paper wasps and red-billed quelea: 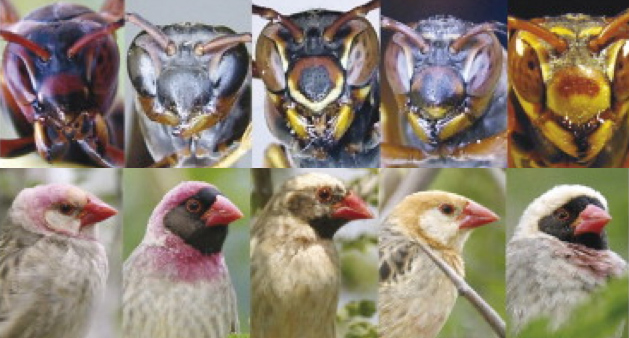 The incredible range of colour and pattern in common murre eggs:

In a delicious bit of irony, their last photo shows some humans with the caption, “even among celebrities with a reputation for looking similar, facial differences provide a surfeit of information for individual identification.”

And then they mess up those very faces! Costner, Quaid and Swayze are labeled correctly in the figure caption, but the authors confuse Kiefer Sutherland for Matt Damon, and Kevin Bacon for David Beckham, to boot. Is this proof that productive scientists don’t have time for cheap entertainment?

Or could Tibbetts and Dale suffer from face blindness, the peculiar condition where humans lose the ability to recognize faces, despite being perfectly good at recognizing other objects? Face blindness is often caused by damage to a particular region of the brain in the fusiform gyrus, but it can also be inherited, and many people suffer from a range of mild face recognition impairments14. As Tibbetts and Dale point out in their review, face blindness in humans is a consequence of our remarkable specialization when it comes to processing faces2. Because we devote a specific region of our brains to the task, it is possible to lose the ability to judge faces while the rest of our minds remain more or less intact. Our impressive abilities when it comes to face recognition might also explain why we cannot (yet) design a computer program that will come anywhere near the performance of real people at this task.

Perhaps the most likely explanation for the mistaken celebrities is that there were last minute photo swaps, maybe for copyright reasons, and someone forgot to adjust the caption. The journal never published a correction, so I wonder if anyone else has ever noticed. I can only hope that Kevin Bacon and the others know that they’ve made it into the scientific press – as a publicity mistake.