Peacocks seem pretty vain, and they definitely care about what others (especially hens) think. But their efforts are too direct. These birds get things done, or they die trying. Unlike internet socializing, the hours whiled away on a lek require a massive investment of physical energy – even if the two are roughly equal in terms of futility.

I thought he was on to something with birds, though – they tend to be social and are good at pressing buttons, as this video demonstrates. What about domestic chickens? Lots of mindless clucking and repetitive behaviour, even to the point of self-harm. Or hummingbirds, the addicts of the avian world, flitting from one nectar source to another like so many web pages.

Birds are deft navigators of the social environment. Head outside at 6 am in May and you’ll encounter nature’s most conspicuous social network: the dawn chorus4. Researchers at Queen’s University have shown, for example, that male black-capped chickadees interact with multiple neighbours during the dawn chorus, matching and overlapping each others’ songs far more often than would be expected by chance alone5. Networking can make a real difference in the life of a bird, too. Take the long-tailed manakins of Costa Rica. If you are a young male, being a central node in the network of male social interactions improves your odds of rising to alpha-male status – and only alphas have a shot at mating with females (video of a dancing alpha-beta male pair)6.

After a few days to mull it over, and a bit of research on passenger pigeons for an upcoming post, I think I have a the answer for Facebook’s animal mascot: European starlings.

First, starlings are just as good at learning how to peck keys as other birds; we have a long tradition of training them for psychology experiments where they learn to press certain buttons, depending on the stimuli they see on a screen.

Second, much like Facebook users, there are a lot of them. Starlings are everywhere. They were originally distributed in Europe, Asia and Northern Africa, but large populations also thrive in North America, Australia, South Africa and pretty much every other place that western European people colonized. Truly, these are rats of the sky. From just 100 birds released in Central Park in 1890, the North American population inflated to over 200 milllion, a considerable nuisance. Like us, starlings do well in cities and places where industrial-scale agriculture can support their overpopulated flocks. 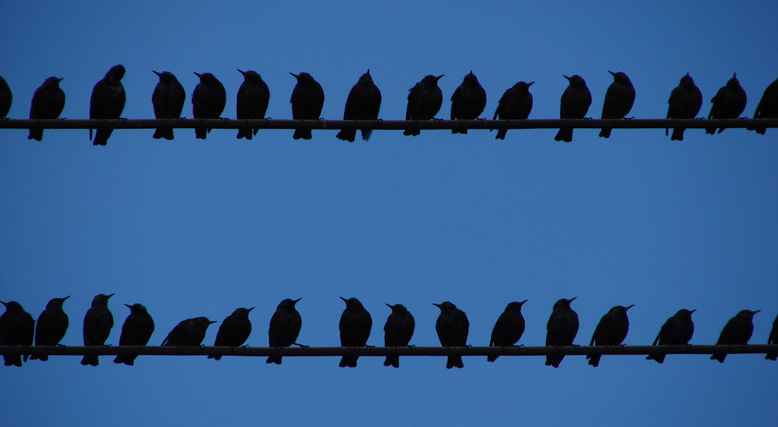 This brings me to the most important way that starlings are like Facebook users: their massive, wheeling flocks.

Take a look at some of videos of this incredible phenomenon – more accurately described as swarming: a good one from Crewe, in England; another from Rome, and a night in Sacramento in December 2009 that caused a sensation (e.g., this news report has the Sacramento starling swarms set to some eerie music).

This is collective behaviour: an organization that emerges from the interactions of many individuals, without any central control. When individuals in a social group follow one another and copy their neighbours, a tightly-coordinated swarm emerges as a result.

Scientists have applied computer models of typical starling aerial movements, like banking, climbing and rolling, to show how these flock dynamics work. Their results demonstrate that simple rules of copying can produce patterns that look a lot like what we see in real starling swarms7,8,9.

And, similar to Facebook connections, interactions in a starling flock go beyond mere physical proximity. The birds base their movements on a group of specific, linked individuals in the network, rather than simply copying those within a given distance in the flock8.

The most recent models suggest that starlings in a swarm might be influenced, to some extent, by all of the other birds in the flock network9. These animals are more adept at social networking than your average Facebook user can imagine, and researchers still have no idea how the birds achieve the near-instantaneous signal processing that swarming behaviour seems to require10.

So why do starlings do it? It’s thought that most animals flock to share information11, gaining benefits in terms of increased ability to find food and avoid predators in a group. The flow of information via online social networks has a lot in common with this. Whether it’s Lolcats or Gordon Pinsent reading Justin Bieber, surges of internet popularity are also the result of copying in a network. And like the wheeling turns of a flock of starlings, internet pop culture takes off in some pretty inexplicable directions.

The birds tend to land in a fairly predictable location, since swarming is done as an evening ritual to choose the the group roosting site by consensus7. This points to yet another similarity: these birds had a networking habit way before Facebook got in on the game.