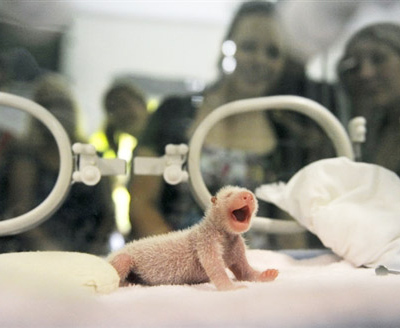 Indeed, it seems these bears have to learn a great deal of what you would expect should be the first things to come naturally to them. In 2007, I met Dr. Rebecca Spindler, a reproductive physiologist from the Toronto Zoo. She told me that getting a pair of pandas to mate isn’t enough. Captive females are terrible mothers: they have no idea what to do with their blind, toothless newborns, neglecting and sometimes even harming the tiny cubs (which are not much bigger than a mouse). Spindler told me about programs to teach parenting skills to females. This basic training, along with a “twin swapping” strategy where two cubs are raised in alternating stints by a single experienced mother, is another reason for the recent baby boom in zoos4.

Of course there are other factors contributing to the scores of baby bears crawling all over China’s “panda factory” breeding centres5 (see photos), including improvements in nutrition and habitat quality, and advances in research on female hormonal cycles and sperm storage1,3. But some have argued that the investment is not worth the yield; especially given that, as of 2007, the only captive-born panda ever released in the wild met a violent end at the hands of other male bears6.

Meanwhile, estimates of just how many pandas are left in the wild are rife with controversy7,8. Giant panda census data is based on scat; specifically, forensic analyses of the bamboo fragments and DNA in panda droppings, as both should offer some signature of a bear’s individual identity. But these methods come with a great deal of uncertainty. Depending on who you ask, there may be anywhere from 3000 to just 1500 wild bears left6.

Are pandas worth the effort when they are so bad at life? Blunt, yes, but panda porn is just one of the many aspects of the bear’s lifestyle that makes them especially prone to extinction. They are awfully fussy about habitat, restricted to a handful of mountain ranges in central China where the bamboo is plentiful and humans are not8. Bamboo shoots form the bulk of their diet, and the fact that pandas are such extreme diet specialists only creates further problems for them. This is not exactly high energy food. To make things worse, the panda digestive system evolved from a carnivorous ancestor, and is thus not well-suited for extracting energy from plant material. Everything about pandas is slowed to a crawl: metabolism, growth, and breeding. Pandas avoid hills. Even social interactions are rare occurrences. A single bear requires a large area for enough bamboo to get by, and the bears avoid intruding on each others’ territory. Females are fertile for only three days a year – which explains why female pandas in captivity cannot abide sharing their space with a male5. In the wild, males have to detect subtle changes in the females’ scent markings and the sound of their “chirp” calls to judge when they can safely attempt a mating9.

If there is one thing pandas are known for, its their royal particularities and resulting imperfections. Stephen Jay Gould wrote eloquently about the panda’s “thumb”, used for deftly stripping the leaves off of each bamboo stalk before eating it10. But the panda’s is no ordinary thumb. It is a modified wrist bone, barely movable, that supports a fleshy pad. The panda uses this extra sesamoid “digit” along with its true thumb for grasping and stripping the bamboo shoots; an economy of movement no doubt useful when eating takes up most hours of the day.

This kind of imperfection in design is part of the evidence for natural selection in evolution, where often the “best solution” in an engineering sense is “debarred by history”. Stephen Jay Gould writes:

The panda’s true thumb is committed to another role, too specialized for a different function to become an opposable, manipulating digit. So the panda must use parts on hand and settle for an enlarged wrist bone and a somewhat clumsy, but quite workable, solution.

Gould made pandas famous in his crusade against the idea of optimality in nature, but emphasis on biological imperfection can be traced back to Darwin11,12. There are many familiar examples. For instance, our knees and backs, originally designed for movement on all fours, are famously bad at supporting our current bipedalism. We are prone to all kinds of biomechanical failures as a result. The human pelvis is another example of imperfection in the form of a design trade-off. It has to be wide enough in women to allow birth of large-headed babies, but the optimal width for locomotion is a much narrower form. We’re left at a compromise: the average hip width couldn’t get much narrower without a drastic change in human brain size or infant development. Women are stuck in slow gear as a result, compared to men.

There is scientific evidence that species like the giant panda are worse off than others, at least in terms of extinction risk. In plants as well as animals, extinctions do not strike a random subset; they tend to hit the large bodied, slow-breeding lineages first13-16. A recent global study of population decline in mammals suggests that while small animals might go extinct because of poor luck, for instance if they happen to lose their habitat to anthropogenic change, large, sparsely distributed animals like the giant panda are predisposed to decline as a result of their intrinsic biological traits15.

But this mold has been broken. What about the passenger pigeon? Super abundant and fast breeding, in the 18th and 19th centuries giant flocks of this bird would darken the sky, sometimes for hours at a time17. These flocks were easy prey for European settlers spreading across the continent. Americans slaughtered the birds for food en masse around the time of the Civil war, harvesting them like “apples from an orchard”, with whole families taking part17. But the decline happened much too quickly for hunting to be the only cause, since the passenger pigeon went from a population of “roughly three billion to exactly zero” in just a few short decades17.

Biologist Tim Halliday thinks that intrinsic biology might have played a role here too; perhaps the pigeons were just as vulnerable as giant pandas are today18. He argues that rarity in this case was relative. Because of the pigeon’s extreme group-living strategy, essential activities like foraging and mating might have hinged on the ability to form huge flocks. When humans reduced the pigeons to just a few scattered millions, the birds could no longer group together at the scale needed to perform, leading to a population crash.

There are dissenting opinions, of course. Some anthropologists have suggested that the sky-darkening flocks were a relatively recent development in passenger pigeon history caused by the American settlers. Increasing agriculture and human-induced alterations to the environment might have caused a pigeon “outbreak”19. Perhaps wild fluctuations in population size, up and down, led to the ultimate collapse of the species.

If some species are intrinsic losers, does it matter? I polled fourth-year students at Queen’s to see what they thought. Should conservation decisions be based on adaptive criteria, such as how well adapted a species is to the current environment, or whether we expect it to withstand future change?

The minority at about a third of the class said no, with 8 students advocating an egalitarian approach to all species regardless of their intrinsic biology. More than twice that number, at 19, were of the opinion that adaptive criteria should be taken into account. But they surprised me with their proactive stance: several said that we should invest more into conservation of the fragile species, not less. They reminded me that even if we have highly accurate measures of risk, the decision of when to draw the line and give up on a species is still value-laden and complex.

This is not a trivial issue, given continual human-induced habitat loss and global climate change. In recent years, field biologists have been using plant populations to study how evolutionary history and genetics might affect adaptive responses to climate change16,20, and theoretical studies are laying the foundation for predicting these responses in other organisms21-23. Whatever investment strategy we choose, good science is needed to judge how well past investments have fared, and provide a basis for future choices.